Start a Wiki
Takahata Shun (高畑 瞬, Takahata Shun) is the main character of the first season. He is 16 years old, born on the 13th of November 1994 at 2:34 AM "out of love". His favourite dish is mitarashi dumplings.

He is first seen reading the Shounen Jump magazine in class 2-B of Misora local high when he is forced to play Daruma ga Koronda along with his classmates.

Up until then he had found life to be dull.

A highly intelligent, passionate, dedicated, loving, violent, and benevolent being. Shun loathed the daily ennui that he was constantly bombarded with. An incredibly resilient individual who sought every action to be meaningful and imperative. Armed with hatred, pain, and sadness; He engaged in the pain wholeheartedly and embraced his new life. Losing his friends turned Shun into a blood knight - viciously seeking to eliminate Kamimaro. He tries his best to preserve the existence of his closest friends and sees them as the most important things to him. Fierce in his determination and steadfast in life; Shun did whatever was necessary to complete each and every individual challenge. Nigh-unshakable in his confidence and accepted his team wholeheartedly with the utmost kindness and genuine love. His ability to acknowledge, observe, and push forward is second to none and embraced death with peace when finally killing Kamimaro. Towards the end of the second series in "Judgement Old Maid" Shun revels in the realization of passion and expresses gratitude towards Kamimaro for giving Shun a beautifully painful life. A character whose existence was defined by the accumulation of a series of complex emotions and the establishment of the meaning of his life. A being whose preservation of his friends and life meant the most in the end.

Shun was in his classroom along with his friend Satake and his crush, Aya-chan when the first game takes place. He is the only survivor of his class after playing Daruma ga Koronda. He soon passes on to the next game, where he meets the other survivors, between them Akimoto Ichika. He first refuses to wear the mouse costume, but puts it on during the game to save Akimoto. Because of this he is the only one that can hear what the cat is saying and procedes to scratch the Maneki-neko's back (along with Akimoto). That allows the cat to fall asleep. After Matsuo fails to fit the bell, Shun manages to mark the point and win the game. After winning, he has an interesting meeting with Takeru and is brought to a hospital.

At the hospital he finds himself having to play another death game, this time with some kokeshi. After seeing how his roommates die, he manages to make a strategy to survive the game and in the process he saves Shouko from her kokeshi form. He then leaves the hospital room to find "the key to open the door", but finds himself face to face with Engacho, who wants to turn him into a kokeshi. Shouko holds his hand since Engacho finds this disgusting and he leaves them alone.

Shun and Shouko are looking for the key when they see a group of four people jumping a rope. The four of them have to jump a hundred times to be able to get the key, but Mako and another of the four die and therefore they need two more people to get the key. Shun and Shouko decide to jump the rope along with the two remaining, but soon after the other two also die.

Luckily, Maeda and Ichika come in time and the four manage to jump the rope together. They get the key and save the two kokeshi with the rope; Akimoto and Eiji. Now the six of them with the key have to find another person in order to be able to pass through the door because the key will only work if there are seven people.

They find Amaya, and after hesitating they all decide to work together and they manage to get through the door. They come out inside the cube that was in the roof and find themselves having to play tug of war, where the group that loses will be shot by cupid statues.

Maeda falls sick, Kris and Eiji are fighting and Ichika is angry, so they are nearly killed, but Shun manages to make everyone calm down. Their group gets to the last round, and when they think that it's their time to fight, Urashima Tarou appears and takes them to a castle, along with the other winning group.

All of them have fun in the castle and have a rest, but Tarou-san then makes them choose a stick out of a bowl. The ones who have a cross die, and the ones who have a circle live. Shun is lucky and he is free to go home, along with Ichika, Kris, Yukio and Amaya. The five are dubbed the "Dice 1 Children".

Once Kamimaro appears a few weeks later, he decides to go back inside the cube to play the next round of games. He is put in the first group together with Shun, Amaya, Yukio, Kris, who he already knows, and Kageura, Kaburagi, Ookuma and Hirano.

He has to participate in the fourth race of the Courage race (or foot race), in lane one. He tells Ichika, in the same race in lane one, to follow him close behind. Shun guesses the correct answer and they both make it to the next game.

Shun watches from the stands as Kaburagi, Sanada Yukio, Kris and Bandou Junko clear their races, but Michio is killed after coming in last. The last race is called, and Hirai Kyouko, Shouko's twin sister, is called to race. After she survives, Shun meets her at the finish and asks her about her relation to Shouko. He is crushed when he learns that Kyouko isn't Shouko.

During the lunch break, all Shun can think about is killing Kami for everything he's done, despite Akimoto's atempts to distract him. After seeing Kyouko and being reminded of his love for Shouko, he commits himself to killing Kami.

During the Boutashi (Pole Toppling), Shun spends the time watching the other teams in a perpetual state of mind, not talking to anyone. When it is close to his team's turn to enter, he discusses a strategy with his team after privately consulting Amaya. During the climax of the match, Shun and Amaya suddenly use the supplied bomb-rigged poles to attack the supervising Kami, and both almost succeed at first glance. However, Kami uses his power to shrink the poles while sucking them into his mouth, then spits them back at the duo, thus dealing the full explosion damage to them.

Shun and Amaya were dumped out of the playing field and is sent flying down to earth covered in grievous wounds. Before the chapter ends, Shun reaches out towards the viewer.

Him and Amaya were rescued by Ushimitsu using his tomfoolery skateboard and were brought to a hospital. Afterwards, Shun and Amaya asked Ushimitsu to bring them to the games. When brought there, Shun met Akimoto again and was taken to the next game.

Shun resumed his pursuit for Kami in his reentry to the game alongside Amaya, teaming up with the newer ragtag band of survivors among which is Akashi. Ultimately, Shun was able to exact his plans and achieve his goal of eliminating Kami by sacrificing himself; albeit his goal has seemed to become nothing more than a fixation of ridding the "world" of "a messed up god". Nevertheless, he's not without humanity in fulfilling his fixation as Akimoto's death impacted him until the very end.

Shun heading towards his cube 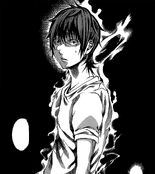 Shun after his undoukan race

Shun guesses which kokeshi is behind him 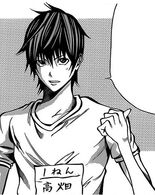 Shun at the undoukan
Add a photo to this gallery
Retrieved from "https://kamisama-no-iutoori.fandom.com/wiki/Takahata_Shun?oldid=5981"
Community content is available under CC-BY-SA unless otherwise noted.