Start a Wiki
Natsukawa Megu (夏川 めぐ, Natsukawa Megu) is one of the students partcipating in the "Trash Can" games. She is introduced in the Sand Dredging game. She is in love with Akashi Yasuto

She first appeared as one of Akashi's teammates in the Sand Dredging game. She survives and makes it to the 7x7 Mystery game. She lives in that game as well.

In the game Kobushi, she is third-to-last to play and confesses her love to Akashi. She tells him to close his eyes and covers his ears as she fears he and Ushimitsu will watch her die. When Akashi and Ushimitsu open their eyes, they no longer see her there and Kami says that she has died.

Right before the Going Home, Akashi finds her in the toilet in a house Kami provided and asks why she is there. She tells him that Kami was lying about her death and promptly kicks him out of the room.

While spending a few moments on Earth, she calls Akashi to a park and takes Rui's hair scrunchie, admitting that she admired her for her honesty with herself. She returns to the house with the Kami Phone.

During the demon extermination game, she is captured by one of the demons and is later rescued by Ushimitsu. After surviving, they went back to the house and are told about the next game, Shadow stepping.

Her target is Akimoto Ichika, one of god's children. As she tries to step on her shadow, she accidentally gets Akimoto's attention. When the train moves, it flips up Natsumegu's skirt, revealing that she is not wearing panties. This presents a "great" opportunity for Natsumegu for it lowered the other girl's guard and so Natumegu is able to step on her shadow successfully.

When she is teleported back to the house, nobody has completed the game yet. Everyone else (except Akashi) has successfully completed the game early. However, they hear Kami talking to a girl who tries to take them away, but Natsumegu, Yae, and Ushimitsu are rescued by Kami, who teleports them back to Earth (Shimura is teleported to the Sky-High Hopscotch and later on Akashi).

While on Earth, the trio manage to track down Kamimaro's apartment. In there, they find a gaming controls book, and a manga that the games were based on. While searching for clues, the girl who Kami was talking to, Acid Mana, comes into the condo causing the group to hide under blankets. When she inserts a game she has made into a game console, she selects the mode Sky-High Hopscotch. Suddenly, the screen moves to Akashi's point of view, making Ushimitsu cry out to him. Acid Mana leaves the house to "get changed" and Ushimitsu goes ahead to find Akashi. Yae and Natsumegu leave in order to find more clues, bringing the manga with them.

While on the train, the girls meet a reporter trying to inquire them about what they were discussing. Panicking, the girls run away in the next station while the woman follows them and grabs the both of them. She then tells them that she has a son, Yasuto Akashi, who is also participating in the games. All of a sudden, Yae, and especially Natsumegu, become enthusiastic about telling her everything they know. They spend some time together in a condo to find clues, but the two young girls sink into their shadows due to the timer on the Kami phone.

Natsumegu, along with Yae, participates on the opposite route of Akashi in the staircase to the next game.

In the Three Kingdom Cops and Robbers, she is put in the Sun Country's team and finds out that Akashi has been captured. Before she goes to find the key holder to save him, she is given a letter addressed to his teammates as proof of trust. She then comes back with Hanna in an attempt to save him, but someone interrupts and slices Yae in half, much to Natsumegu's despair.

When the group successfully opens the gate, they save Akashi, and some others who were captured. The ceiling falls on those left behind because of the six-hour time limit. As they try to escort Akashi and Hanna out of the base, they get caught by the Sun Country's King, Lily, and Natsumegu is sent to their own prison as punishment.

After almost six hours, Akashi comes back to see the last 13 minutes of her life. As he becomes restless and desperate to save her, she says there is nothing he can do. Natsumegu once again confesses her love for him has gotten stronger. Akashi says that she was precious to him and was given the scrunchy given back the scrunchy passed down from Rui. As they hold hands one last time, the timer passes the six-hour mark, leaving her crushed by the ceiling, saddening Akashi.

When Akashi becomes God, he decides to revive Natsumegu before anyone else. However, what he creates does not have memories of her past life, and disappeares after Akashi losing focus on her. Akashi does not attempt to resurrect Natsumegu again after this, realizing that he can only recreate Natsumegu as she is in his imagination. 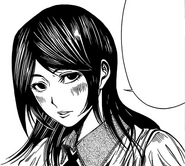 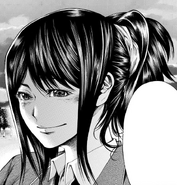 Natsumegu talking to Akashi before the Demon Extermination 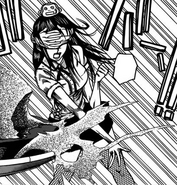 Acid Mana face-shifting into Natsumegu
Add a photo to this gallery
Retrieved from "https://kamisama-no-iutoori.fandom.com/wiki/Natsukawa_Megu?oldid=5890"
Community content is available under CC-BY-SA unless otherwise noted.