Start a Wiki
Amaya Takeru (天谷 武, Amaya Takeru) first appears at the end of chapter 4, after killing all the remaining students of the Maneki-neko game with a katana apart from Shun and Akimoto. His birthday is on November 29.

Amaya is a violent, sadistic, brutal, blood-lusting, savage, and tyrannical individual who actively takes pleasure in the destruction of everything around him to an extreme extent. Not afraid of displaying perversion towards violence & gore and his deep-seated friendship with Shun. Highly intelligent and analytical;He struggles with finding with place in the world and relies on the perception and actions of others to subtlely define he is: A man with broken heart and lonely life. Amaya views on destruction is heavily emphasised throughout the manga. Feeling devalued and worthless, he sought externalize his pain by diminishing his environment. The direct result of an incredibly brutal and abusive household. He puts up a face of uncontrollable rage and immunity to pain, but his most important memories are those of Shun Takahata: His greatest friend who made him feel alive. He breaksdown when he realizes that Shun was the most important person to him. Unable to accept this, he crumbled into pain. Amaya at best is a Tragic Anti-Villain/Hero. His emotional and mental pain exacerbated by the death of Shun and the accumulation of abuse from his parents.

A highly complex human being whose existence was defined by the deconstruction of his identity. Seeking to replace the inner turmoil of his soul; Amaya at the very end sought to maintain his sense of self, but ultimately fell at Akashi's hand. Saddened by his failure he defeats himself, as he succumbs to Egodeath and dies.

Superhuman Strength: Amaya is repeatedly shown to be able to life thousands of pounds with absolute ease and effectively subjugate those around him at will. Brutalizing upper-classmen at the age of fourteen and casually wields helicopter blades as if they were pieces of paper. Taking on mulitple enemies at once and seen crushing threw stone and rock with no trouble what-so-ever.

We don't know how he got to the second game, but he survives. After kissing Akimoto he attacks the police officers that come to get the remaining students, and ends up in a separate hospital room that is under surveillance.

However, when the kokeshi game starts, he kills (supposedly) the guards and escapes. He is seen later skipping a rope 7000 times and he beats up a kokeshi. He also attacks Kris, but Shun stops him, since they need seven people to be able to cross the door in the hospital ceiling. He saves Akimoto's life by grabbing her arm and pulling her up into the cube.

He saves the lives of everyone else from his group when he pulls the rope and wins the shouben cupid game, but that causes the other team to die. He stays awake the whole game waiting by the door for it to open.

When Urashima Tarou appears, he goes with him to the castle and is seen sleeping. He is one of the lucky ones to survive the "Un" and returns to the outside world. He then kicks one of the people that come to pick them up on the roof of the cube, and steals a helicopter. While he leaves, he says to Shun "We'll meet like this again someday!".

Three months later, they are called back to play a second set of games at the Undoukai. This time, however, they will meet up with people who have survived the previous games - both God's Children and Kami's Jr's. During one of the games, Amaya, along with Shun, throws explosives at Kamimaro. Due to one of the rules about violence towards the God, Kamimaro spits out the explosives which injure both Amaya and Shun. They are thrown out of the cube through trash containers.

Just in time, Ushimitsu Kyoshiro is able to rescue both of them and takes them to a nearby hospital. When Shun finally recovers, he, along with Amaya, is taken back to the cube, finding a new game taking place. When the game finishes, Amaya and the others are picked to proceed to the "final" game, Judgment Old Maid. Amaya is the first one to complete the game, thus becoming God #1.

Finally becoming God, Amaya starts by destroying Earth. Meanwhile, Akashi and Ushimitsu graduate, becoming Gods as well. Amaya cannot approve of three Gods existing at the same time and initiates a game to decide on one winner. Each of the three players is given a playing die. On their turn, they roll the die, and are allowed to throw as many punches as the number of pips rolled. The target can be chosen freely and is only allowed to fight back on their own turn. For every blow dealt like this to an opponent, they will lose their memories of one person in their life. If a player stays on the floor for 10 seconds, they lose.

As the game progresses, Amaya receives numerous blows, forgetting several people in the process. However, his biggest and fondest memories are those of Shun, and can not be forgotten, no matter how many blows he receives. Distressed over this, he starts targeting himself on his turns, telling Shun to leave his head. Amaya keeps punching himself adamantly, stating that he can stay himself even without any recollection of Shun. Ushimistsu deduced that deep down in Amaya's heart, Shun was the only person in his life that accepted him for who he is and made him human and the only person he considered as a friend. Amaya couldn't hide the unrest in his heart when Shun died and that destroying things was the only thing he could cope with after his death. Spending his next few turns like this, Amaya gradually becomes unable to get up from the floor within 10 seconds. He finally forgets himself and dies with a smile, losing his own game. 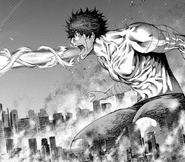 Amaya wreaking havoc on the city with his power of God

Amaya vs. Akashi post-graduation
Add a photo to this gallery
Retrieved from "https://kamisama-no-iutoori.fandom.com/wiki/Amaya_Takeru?oldid=5984"
Community content is available under CC-BY-SA unless otherwise noted.