Start a Wiki
Akashi Yasuto (明石 靖人, Akashi Yasuto) is the main character of the series. After getting in a fight, with his classmate and best friend Aoyama, that caused him to skip school, he was brought to Sein Kami's "Kamiculum", God's test for the "trash" who skipped school.

The son of law enforcement officer Akashi Jun'ichiro, Akashi has a strong sense of morality and self-sacrifice. Despite being visisbly distraught when the Oni began to attack, he quickly gathered himself up and began to lead a counter-attack after analyzing the clues given. A natural leader, Akashi has many friends who have come together to fight beside him against the unknown obstacles.

In a short flashback, Yasuto and Aoyama are shown to be playing soccer together. After Yasuto was injured, Aoyama steps up to take the game-winning penalty kick to get into Nationals and fails horribly.

In the present day, Yasuto is at school with his friends when he gets into an argument with Aoyama over losing their future in soccer due to the missed penalty kick and storms out, leaving the school before the Daruma game begins. Another flashback reveals that Yasuto wasn't injured-he couldn't take the pressure of taking the penalty kick, so Aoyama took it for him despite being bad at PK's and missed.

While the Daruma game is taking place, Yasuto sits in a coffee bar debating how to apologize to Aoyama. He decides on heading back to the school, unaware of the chaos that is occuring. As he heads back to school, Yasuto sees a crowd of pedestrians near his school. He rushes into the crowd only to see his surviving fellow students who cleared Maneki-neko, escorted by paramedics. One of the surviving students, Senichi Aoyama, was seen carried out by paramedics just as Yasuto was about to question him about the whole situation that he was in. Aoyama responded: "Let's play soccer", while Yasuto was being dragged away from by the police.

As he heads back home, he was confronted by his father who was worried about him. His father told him about the killings that happened at his school and only 3 people survived. Yasuto wanted to ask for more but his father refused to ask more. Just as he was about to head back to work at the police department for a while, he told his son to stay home for now and don't answer for anyone. While he was in bed thinking about what happened today, a Ninomiya Kinjirou Sontoku showed up at his door. The Nino has come for the high school students who have skipped school as Yasuto tried to question it. He couldn't get the answers from it but decide to go with it to get answers. When he was riding the Ninomiya backwards, it killed the witnesses unrelated to the coming game for the students who skipped school. It even decided to drop him high up the ground when he says that he wanted to go down but changed his mind. Just as he was about to enter the huge cube in the sky, he sees other students looking at him funny for riding the Ninomiya the wrong way.

He is one of the three who come close to God.

As a curiosity, in the manga "Real Account", it is revealed that Akashi masturbates 12 times a week. 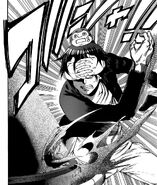 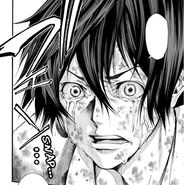 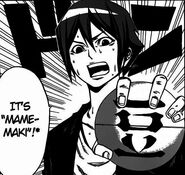 Akashi feeling sick after getting off Kinjirou's back 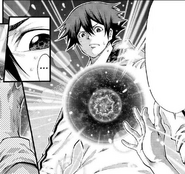 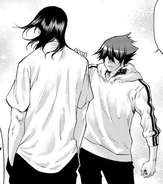 Akashi reunites with Ushimitsu upon graduation

Akashi fighting Amaya after graduation
Add a photo to this gallery
Retrieved from "https://kamisama-no-iutoori.fandom.com/wiki/Akashi_Yasuto?oldid=5892"
Community content is available under CC-BY-SA unless otherwise noted.